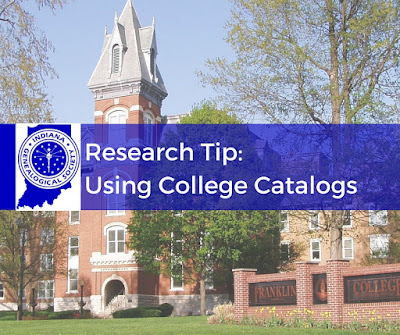 Have you looked to see if anyone in your family attended college, even if only for a class or two? College catalogs are a great resource, as they can provide much more information than just lists of students, graduates and alumni (several of which are in the College Records section of the IGS website). They were meant to be advertisements to get people interested in attending, and as such provided more details about daily life than what you might find in a yearbook or even a student newspaper.

These catalogs often ended up at public and university libraries, and thanks to these digitizing partners, many catalogs from Indiana's colleges and universities can be found online at Google Books and Internet Archive.

College catalogs can tell you:

Also, it was often required - no matter what you were studying - to take classes in penmanship and elocution. As the 1912-1913 catalog for Muncie Normal Institute (today known as Ball State University) noted, "The ability to write a good hand is one of the most satisfactory as well as valuable accomplishments a person can possess."

Rules of the School

At Northwestern Christian University, any student who got married during the school year could be suspended for the rest of that year, at the discretion of the faculty. Religious services, even at public schools, were often mandatory - at Indiana University in 1869, students were required to attend religious services each day, as well as going to Chapel on Sunday afternoon (besides their regularly Sunday morning attendance at an area church).

You may be used to commencement being held in May or June today, but in the 1800s and early 1900s it was more common to hold it in July or August. Some colleges had long breaks in between sessions, but others, like Northwestern Christian University in Indianapolis (today known as Butler University), had only 3 days off in 1857 between the end of their first term and the beginning of their second term.

At Hanover College in Jeffersonville, the expenses for the 1832-1833 school year were a whopping $67 (including $4 to pay for washing and $5 to have wood for the fire and oil for the lamps). However, you could get a $25 credit if you worked in one of the the college's workshops (carpenter, cooper, wagon maker, etc.)

These catalogs were first and foremost advertisements, and as such extolled the virtues of attending their school. In 1869, Indiana University touted the fact that Bloomington (population 3,500) was not full of disease but was "free from the malarial influences found in many parts of the West." In 1883, Purdue University was proud to note that its campus included lots of pine and hemlock trees to provide a "wind break" and that its dormitory had a bathroom on each floor.

These catalogs also often included illustrations showing scenes from the campus, inside its buildings, etc.

These illustrations first took the form of pen and ink drawings, but then beginning in the late 1800s, they started including photographs.

See what college records are available on the IGS website.

Posted by Indiana Genealogical Society at 9:14 AM