Looking for info on Jeremiah Horan. Died, remarried? Born around 1828 in Ireland; Was in the 1870 census in Monticello, White County, married to Ellen; Not in the 1880 census; she remarried a Michael McDonald. Would your databases have any more info than Ancestry.com ?

Posted by Indiana Genealogical Society queries editor at 7:25 AM No comments:

Searching for Wyett Family. Only info I have is Nancy Wyett married Alvah Wheeler 17 Nov 1871 in Spencer, Owen County, Indiana. He was on 1870 census Washington Township,  Owen County, as railroad laborer. They moved to Maine between 1871 and 1880 where they appear on the Maine census with children. Where did she come from?

Posted by Indiana Genealogical Society queries editor at 7:23 AM No comments:

My second great grandparents David McDaniel and Hester Johnson were married in Blackford County on 21 Apr 1861.  My source info is from Ancestry.com "Indiana Marriage Collection, 1800-1941".  The citation source is “Blackford County IN Marriage Records Book A 1839-1857, Use Corrected Book A, page 88".


I need a complete marriage record.  I am hoping that the record lists parents of the bride and groom.  I am willing to pay a reasonable amount for this record.  Please advise.  Thank you.

Posted by Indiana Genealogical Society queries editor at 7:22 AM No comments:

I am looking for my great-grandfather Burr Adrian Welker’s birth certificate. He was born on Sept 13, 1884, in Indiana. It stated on his Certificate of Death Registration that he was born in Indiana; other than that detail, I do not know any other facts about his birth.


I have contacted the State of Indiana but was told that since he was born before 1907, I should contact you. He died in Terre Haute, Indiana, on April 5, 1945. Burr Welker is my paternal grandfather's father. Please let me know the status if you can/cannot help me, so I can move on. Thank you kindly for an email or phone reply.


rebecca.ivatury@gmail.com
Posted by Indiana Genealogical Society queries editor at 7:19 AM No comments:

[We found this interesting flyer in the State Library. Some genealogists may be interested.] 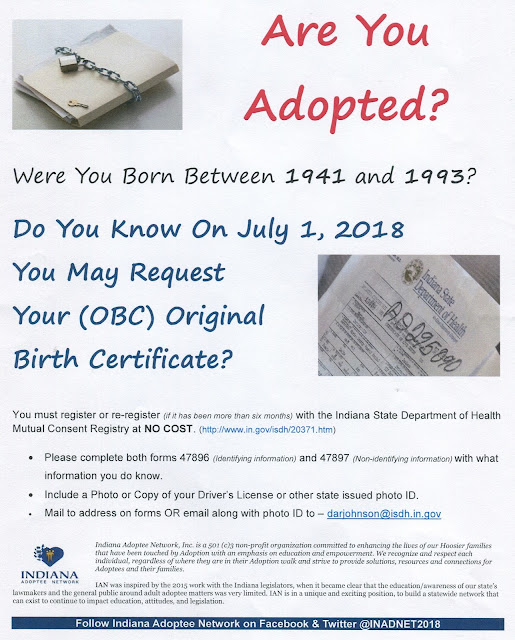 State Archivist Jim Corridon announced on Tuesday that the first ever online Catalog for the Indiana State Archives is now live and ready for use.

Go to ResearchIndiana.IARA.IN.gov and take a look. There is also a short video on how to use the new catalog.

Genealogists should find the new tool of great use in their work. Congrats to Mr. Corridon and IARA! 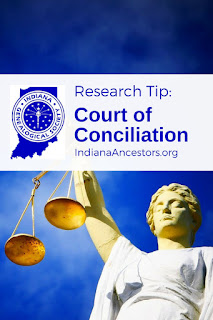 Archivist of the United States to Lecture At Purdue

On Thursday, September 28, 2017, David S. Ferriero, Archivist of the United States, will present "Preserving the Past to Inform the Future: The View From the National Archives."

This program is presented by the Purdue University Libraries. It is free and open to the public.

About David S. Ferriero
David S. Ferriero was confirmed as the 10th Archivist of the United States on November 6, 2009. Created in 1934, the National Archives and Records Administration (NARA) is responsible for preserving and providing access to the records of the U.S. Government. NARA has 43 facilities across the country, including 14 Presidential Libraries, containing approximately 13 billion pages of textual records; 42 million photographs; miles and miles of film and video; and an ever increasing number of electronic records.

Previously Mr. Ferriero served as the Andrew W. Mellon Director of the New York Public Libraries and held top library positions at the Massachusetts Institute of Technology and Duke University.

Mr. Perriero earned bachelor's and master's degrees in English literature from Northeastern University and a master's degree from the Simmons College of Library and Information Science. Mr. Ferriero served as a Navy hospital corpsman in Vietnam.
Posted by Indiana Genealogical Society queries editor at 8:22 AM No comments:

New on the IGS Website: 31 Free Databases from Across the State

The Indiana Genealogy Digitization Project continues to generate more materials for Indiana genealogy research! Check out the latest databases, all available for FREE on the Indiana Genealogical Society website.

Does your organization have Indiana genealogy materials that need digitized? Apply for an IGS Indiana Genealogy Digitization Project grant, for a new scanner, computer, and related materials.

Posted by Indiana Genealogical Society at 3:49 PM No comments: