From coal miners to female prisoners to Boilermakers to Odd Fellows -- there's a little bit for everyone in the newest databases on the IGS website! Let's see what's new:

- Directory of Businesses and Landowners, Wayne County, Indiana (1895)
Browsable digital images of listings from an 1895 gazetteer for Wayne County. This database was contributed by Wayne Klusman.

These databases are available to members of the Indiana Genealogical Society. Not a member?  Join today and get access to these and 1,700 more collections!

Brown County:
- Index to Will Books for Brown County, Indiana (1845-1957)
An index of 351 entries from Brown County Will Books A, B and C, which cover 1845 through 1957. The index includes the Will Book, page number, and the date of the will. This database was contributed by Randi Richardson.

Coal Miners:
--Coal Miners Injured in Indiana (1884-1888)
An index of coal miners who were injured while working in Indiana, as listed in the state mine inspector's annual reports for 1884 through 1888. The index includes the date they were injured, a description of their injuries, the name of the coal mine and its county.

Prisoners:
- Prisoners Pardoned from Indiana Women's Prison, Indianapolis (1878-1881)
An index of female prisoners sentenced to the Indiana Women's Prison who were later pardoned, as listed in the institution's annual report for 1881. The listing includes the crime they were convicted of, the amount of their sentence, how long they served, and the date they were pardoned. 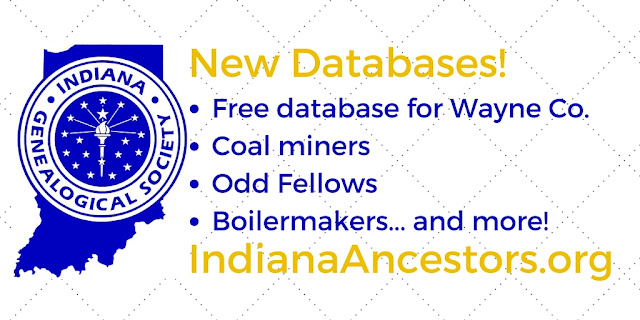 Posted by Indiana Genealogical Society at 9:51 AM