Sebastian Frederick, Jr. was born in Moorefield, Hardy County, West Virginia and died 9 October 1827 in Gibson County, Indiana. He was a Revolutionary War sergeant and spy. He served as a Sergeant in the Second Battalion of Captain Samuel Cunningham's Company in the Washington County Militia from 22 June 1781 - 23 July 1782. Proof: Militia Loan Document of 1 April 1784, certificate of public debt, number 2026.

His father, Sebastian Frederick, Sr. (1740-1787) also served in the Pennsylvania Militia (with Captain Minter) as a spy in the Revolutionary War.

According to FindAGrave, Sebastian is buried in the Frederick Family Cemetery in Pike County, Indiana, but there is also a military marker for him in Greenlawn Cemetery, Vincennes, Knox County, Indiana. 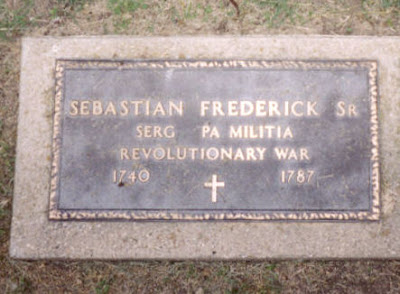 Jonathan Conger was born in 1750 in Woodbridge, Middlesex County, New Jersey. He served in the New Jersey Militia and enlisted as a Revolutionary War Soldier. He was trusted by Col. John Dodge of Ft. Vincennes in Vincennes in 1780 to carry his official seal to Col. George Rogers Clark, at Express Falls on the Ohio River. For this, he is listed as a Revolutionary Patriot. He served in Francis Vigo's Militia, and was included in the roster of those who served in the campaign of Tippecanoe in 1811. He was credited then with serving in the War of 1812.  (History & Families of Pike Co., Indiana, 1816-1987, pages 9 & 10, published by the Pike Co. Historical Society.)

Jonathan Conger is buried in Conger 1 in an unmarked grave on private land. A headstone was erected for both him and his wife Mary (daughter of Sebastian Frederick) in the Davidson Family Cemetery, Clay Township, Pike County, Indiana.

Both men are listed in the Patriot databases for DAR & SAR.