FOUND: Photo of Daughter of Denison SCHOVILE of DeKalb County 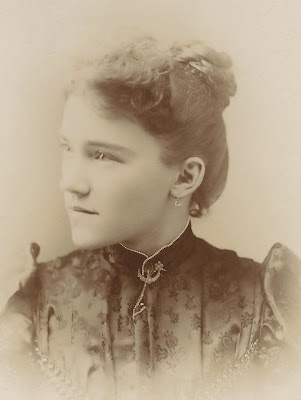 Shelley Cardiel (cardiels@comcast.net) has found this photo identified on the back as being the daughter of Denison SCHOVILE. It was taken at the Newman Studio in Butler, DeKalb County, Indiana. It appears to have been taken in the 1890's, with the young woman in the photo likely in her teens at the time.

Research has found there was a William Dennison SCOVILLE (1822-1902) who lived in adjacent Steuben County. According to information posted at http://www.ingenweb.org/insteuben/obits/view/scoville-william.txt, he was married 3 times - 1) Clarissa Sheffel, 2) Julia Ann Trowbridge, 3) Mary F. (Hicks) Watkins - and had several daughters in the right age range to be possible matches for the woman in this photo.

Shelley is hoping to locate someone from this Schovile/Schoville/Scoville family so that the photo can be returned to the care of family. If you are a descendant of this family, or you know someone who might be, please contact her directly.
Posted by Indiana Genealogical Society website manager at 8:47 AM