I adopted a grave of Capt.  Erb in 2014. Mr. Timman, genealogist from Newark, helped me; also Donna Work from Norwalk. Corey Stewart from the National Archives helped me too. I met her in Waregem near Flanders Field US WWI in 2016. I met also Jody Champagne in 2016.


Harold Boak is on the left corner with a painting of the castle of Olsene he brought back in 1979. Fifteen American soldiers were buried in Tielt until June 6, 1919. Five among them lies at Flanders Field. Also E Bozenhart. I met regularly Jeff Cameron. His great uncle Ernest Bozenhart died in Tiet;  112th Sanitary Train.


In 1979 I was just married and at that time I was not especially interested in WWI. In the last 5 years I met journalists to bring the activities of the 37th Div into their attention. They passed by Tielt and his region for the End Offensive from Oct 31, 1918.


Now I  search for a picture of Harold Boak as a soldier. His files at the National Archives are damaged by water by a fire. 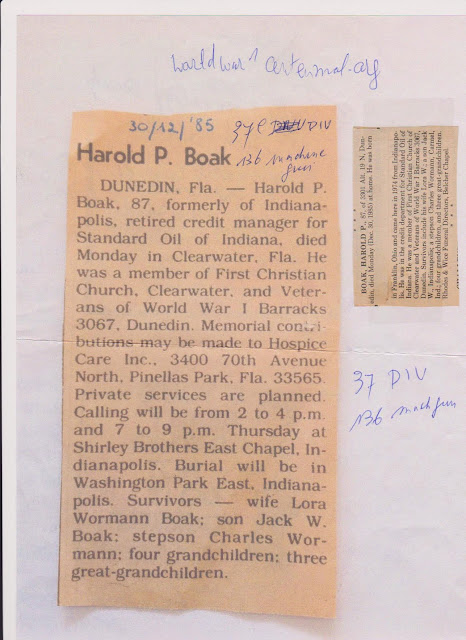 Email ThisBlogThis!Share to TwitterShare to FacebookShare to Pinterest
Labels: Boak