The Indiana Genealogical Society recently held elections for the directors of the Central districts. The results are:

The directors will be inducted at the IGS Annual Conference in New Albany on April 28. They will serve 3-year terms.

IGS would like to thank Nichelle Hayes for her service as Central District Director. 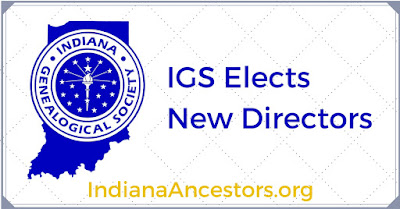 Posted by Indiana Genealogical Society at 8:14 AM

Email ThisBlogThis!Share to TwitterShare to FacebookShare to Pinterest
Labels: elections, IGS board