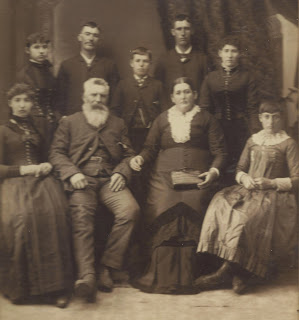 Shelley Cardiel (cardiels@comcast.net) has found this photo of the SAYRE family of Bartholomew County, Indiana, including: Elizabeth Charity; David Colvin Cora Neuton (b. 1837); Mary TABOR (b. 1842); Mary Kenton "Molly"; Annie Viola; Israel Donaldson; Robert Owen; Alfred Martin; and Jen Nettie SAYRE. It appears to have been taken in the 1880's - no studio or location is listed.

Shelley also has 2 other photos related to this family - one of Robert Owen Sayre taken in 1910 in Seattle, Washington and one of Alfred Owen Sayre (born 18 November 1899; died October 1979 in Blaine, Washington; buried in Enterprise Cemetery in Ferndale, Washington; married Gwendolyn MAURER 1903-1995) taken when Alfred was only a couple of years old.

Shelley is hoping to locate someone from this SAYRE family so that these photos can be returned to the care of family. If you are a descendant of this family, or you know someone who might be, please contact her directly.
Posted by Indiana Genealogical Society website manager at 9:06 AM