New Databases and New Milestone: 6 for 92!

You have ancestors all across Indiana. So do we! That's why we are proud to announce a new milestone:

The Indiana Genealogical Society now has at least 6 databases for each of Indiana's 92 counties! The two databases that put us there are two from Spencer County:

- Spencer County, Indiana Veterans at Indiana State Soldiers' Home, Lafayette (1902-1916)
An index of 30 Spencer County veterans, wives and widows who were staying at the Indiana State Soldiers’ Home between 1902 and 1916, as listed in the home’s annual reports. The home was built in 1896 to care for Indiana veterans, as well as their wives and widows. Admissions were based on a quota system for each county, proportional to its population. This database includes their age, birthplace, details of military service and any medical conditions.

Both of these are Members-Only databases. IGS members can use them after they log in. (Not an IGS member? Join today!)

Explore what records IGS has available. With more than 1,500 databases on the site, you're sure to find something to help your Hoosier research. 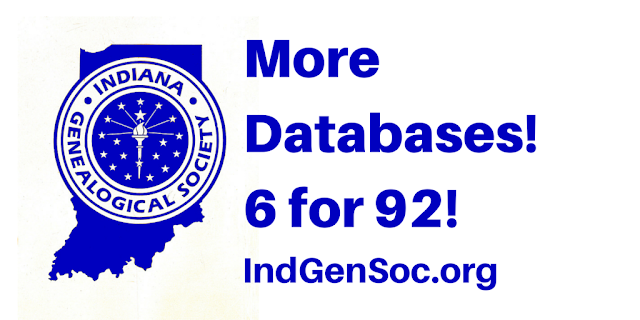